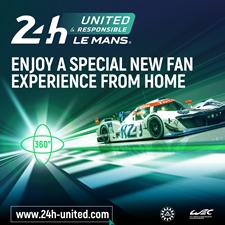 The 24 Hours of Le Mans will be taking place behind closed doors for the first time in the history of the race. Consequently, the organisers have introduced an ambitious digital platform with video and audio content to take the race to its spectators.

No effort has been spared in these challenging times. Launched today, the platform www.24h-united.com encompasses the ACO’s core values. The call to action is two-fold:

A fundraising campaign in aid of the European Society of Intensive Care Medicine to help train medical staff in the treatment of Covid-19. As thanks for donations, fans’ names will appear on a virtual wall as well as at the 24 Hours of Le Mans circuit. As an extra token of thanks for donations of over €150, contributors will see their names set in stone at the 24 Hours of Le Mans circuit. The Automobile Club de l’Ouest will also be donating to the appeal.

An invitation to share real life experiences of the race on social media: “Share your past or present experience of the 24 Hours of Le Mans” by sending us your photos, videos or stories. The contributions are shared on the United and Responsible platform and on the usual 24 Hours of Le Mans social media accounts.
Several personalities have voiced their support for the fundraising effort and have accepted to lend their names as campaign ambassadors*.

The United & Responsible platform is designed to share the heart and soul of the world’s greatest endurance race as widely as possible:

The “making of”, featuring interviews with participants, a peek inside race control, shots from the commentary box or live from the production team truck during the race.

The history of the race, with still and moving archive pictures from almost 100 years of the legendary 24 Hours of Le Mans. A variety of themes, such as ‘Women in motorsport’, illustrate the ACO’s spirit and values.

Technological innovation for tomorrow’s motorists, with particular focus on the Mission H24 project to develop a hydrogen-electric racing prototype to drive innovation in the field of carbon-free transport.

In short, the aim for the 88th 24 Hours of Le Mans is to share the passion for this race more widely than ever.

You may only select one accommodation location per package quotation

Do you wish to change your location?

Email me my quote